Not all outdoor weddings are filled with sunshine (literally). This one particular wedding was an outdoor event, and that weekend was scheduled for 100% chance of rain, and a lot of it. However, the KYAE team and I did not let that stop us from creating a magical evening for the newlyweds.

land with a phenomenal view of the lake locally in Burlington NC. The lake was the background of the ceremony and it was absolutely beautiful. IT was the main reason Sadie didn’t originally want a “big” tent.  She didn’t want to block that view but with little to no shade, they finally trusted KYAE in putting up several tents both small & large enough to house buffet

lines, bars, and at least half the guest count.  This would allow the elderly couples places to seek shelter from the sun.  However, as the week grew closer we watched as the drought we had for the past few weeks came to an end and we were calling for 4-8 inches of rain in just a few short days…with possibilities of over 10 inches. 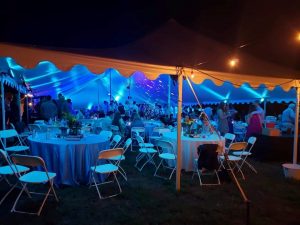 After much debate, the reception took place under a large tent that fit just under 300 people. The tent was filled with many round tables, two bar areas, two large buffet lines, a dance floor, lounge areas, and various other fun items and décor. The best part of the wedding was that the rain held up and didn’t hit until the wedding was almost halfway over. At that point, everyone was already under the tent dancing the night away.

Jenn and I arrived at 11:45 to start unloading her car and begin set up for the long day ahead. The rest of the team arrived between 12 pm and 4 pm. The first wedding I worked I was underprepared. I didn’t bring backup clothes, or backup shoes, or any drinks for myself throughout the day, but since this was an outdoor wedding and there was a high chance of rain, I over packed and even brought rain boots. (go me!!).  Jenn had always warned to always be prepared.
With nearly 300 guests, we had a team of 12 KYAE members assisting with everything from checking restrooms, helping with parking and greeting, driving Sidexside ATVs to bring guests from the parking areas, along with making sure guests were not going back to their vehicles to get their own beverages.  You have to make sure guest safety is your number one priority on top of making the wedding a memorable experience for the bride, the groom and all the other guests. 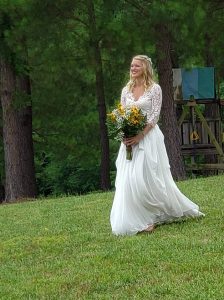 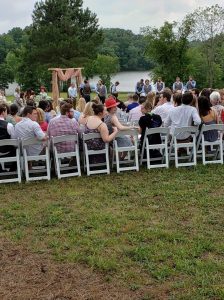 We weren’t hit with the rain until right after cake cutting.  However, it poured cats and dogs nonstop as if a monsoon had stopped right over top of us.  We nearly received 4-6 inches in a mere few hours.  With Jenn’s quick thinking we grabbed any linens and umbrellas from outside trying to save any and all décor as quick as possible.  Then once the rain started flooding the tent we quickly began picking up linens to try and save them from being stained with mud.  We had already tied up all of the corners of the 8’ banquets into cute rosettes to keep those linens off of the ground.
As we began breaking down chairs and pulling décor the mud became almost like quicksand even in the tent because with the ground leading to a lake all of the runoff from the house came through the tent.  At that point we were trekking through mud under the tent trying to sort through all of the supplies and load them into Jenn’s car. Luckily I had my rain boots and rain jacket, or else I would have had a rough time with take down.
The coolest part about the rain and the mud was that the bride and the groom were

the most easygoing and happy go lucky couple. They were running in the rain, jumping into the lake and dancing in the mud, and they didn’t have a care in the world. They lived in the moment and that was the most beautiful thing to witness.

After hours of tear down and loading up the car, we finally left the site around midnight and I was so exhausted. This wedding was the longest wedding I had ever worked and required a lot of labor, but it was worth it to see how happy the bride and groom were. That is always the most rewarding thing, when the bride and groom are smiling ear to ear because you and the team you are working with helped create a night they are never going to forget. That is my why.
Can’t wait to see what I learn at our next event…
Sincerely,
Kayla, 2019 summer intern
#lifeofanintern
#teachablemoments